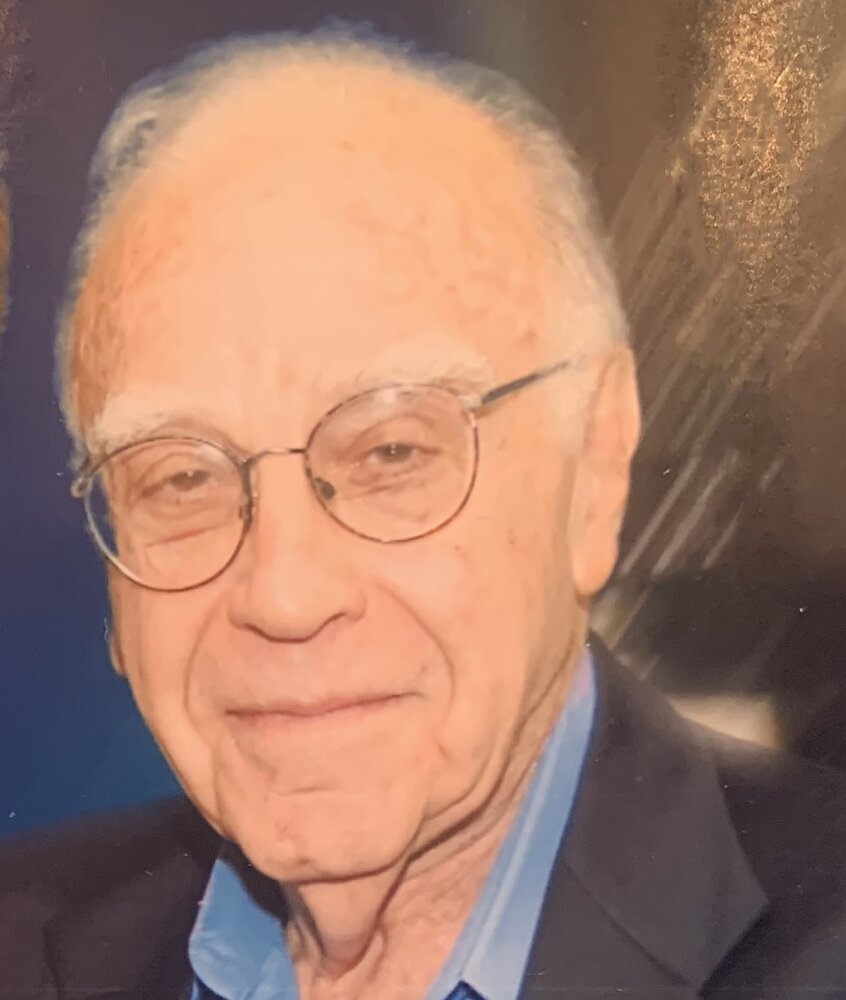 Please share a memory of BERNARD to include in a keepsake book for family and friends.
View Tribute Book

Bernard Schulman, who died on November 3 at his home in New York City, was a beloved father, grandfather, brother, uncle, and friend. He was 92.

Bernie was an Army veteran, a damn fine attorney, and a lifelong New Yorker. Malcolm Gladwell wrote about guys like him—a son of poor Jewish immigrants born during the Depression who scrapped his way to Fifth Avenue—in Outliers.

He had a great sense of humor and enjoyed a good practical joke: Once, at his daughter’s Bat Mitzvah, he convinced a family friend that they should take a celebratory plunge into the pool adjacent to the reception area—in their underwear. (There may have been some drinking involved.) When they disrobed, Bernie was wearing the bathing suit he had secretly changed into earlier, leaving his pal standing there in his briefs in the middle of a crowd in formal wear.

Bernie had a deep reservoir of one-liners that he especially liked to deploy on waiters. (“How’s everything?” “Good…and the food’s not bad either.”) Even when he sat for a deposition in an important case, he could not resist treating the occasion like a standup routine. The opposing counsel thought he was hilarious. He liked to kid with the doormen, deli guys, security guards, and others whom he befriended on his daily commute to his midtown office. “You’re lucky,” they would tell his son Daniel earnestly on occasions when he accompanied his dad into work. “Your father is a good man.”

He was an excellent dancer and a pretty good belter of show tunes. He was hard to beat on the tennis court and was a lifelong fitness aficionado. Even as a senior citizen, he could still do 100 pushups in one go. He made delicious French fries and was otherwise very proficient at ordering takeout. For reasons that he took to his grave, he stored his Raisin Bran in the fridge.

He was a diehard supporter of all New York sports teams and was once banned from attending Boy Scouts jamborees for making a beer run so he and the other dads could properly enjoy a Giants game on the portable TV they had lugged into the woods. It was worth it.

He loved big band music (Billy Eckstein was a favorite), pre-MAGA Jackie Mason, a great bargain, Nathan’s hot dogs, lean corned beef on rye, westerns, and Bond films. He was fiercely devoted to his family, loved his grandchildren immeasurably, and derived immense pleasure as a provider. He would wrestle you to the ground if you attempted to pick up a check.

Bernie was born on March 25, 1930, in Williamsburg, Brooklyn. He was the youngest of four brothers (the eldest, Jack, died as a toddler). He attended P.S. 147 and later New Utrecht High School in Bensonhurst, where he met a lifelong group of friends who dubbed themselves the “Bensonhurst Fab Five.” He attended the City College of New York, then served in the U.S. Army, deploying to post-war Europe during the Korean War. During a stint at Fort Dix, he went AWOL to visit his beloved mother Lena and got busted down to private. He had no regrets.

Bernie put himself through Brooklyn Law School working at the post office and later earned a master’s degree in taxation from New York University. He launched a successful legal practice that eventually became a partnership known as Eisen, Herschkopf & Schulman. He loathed “tax season” but dutifully did the taxes, gratis, for many close friends and family. Without being asked, he provided financial help to family members in need. He was invariably the person friends and family turned to for financial and legal counsel, which he dispensed wisely and with trademark wit.

Bernie was tough, and he was strong, inside and out. He shocked his hospice team by outliving their prognosis by more than a year. Even near the end his nurse did not discount him from bouncing back. “There is only one Bernard Schulman,” she said.

There was only one Bernard Schulman, who came up from nothing to build a legacy for himself and his family and whose memory will be a blessing to the many who loved him, and whom he loved, during that long, full, laughter-filled lifetime of his.